"I can do all things through Christ who strengtheneth me." Philippians 4:13 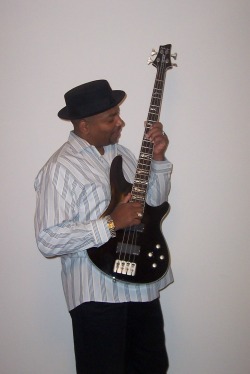 What can be said of the very few artists who innovate without intent or pre-meditated recognition? Keith Mason alos known as "Top Hat" to his peers has finally figured it out. He knows his only validation comes from Christ Jesus and his talents blessed each time he lifts His name in song. Keith and "Top Hat" exist in the same musical realm and are humbled by the Holy Spirit where all inspiration is received.

Keith's talent is one that is highly favored allowing him to form, create and execute his musical gifts in the production of his music controlling all aspects and taking direction from the Lord. The amazing aspect of Keith's gift as a bassist is true God-given ability to play right-handed while naturally being left-handed. God is living and moving through us as witnessed in this unusual occurrence. Keith plays solely by ear relying on his raw talent and impeccable tone.

The journey which leads to the release of this EP began in a musically rich childhood in Little Rock, Arkansas. Keith began playing drums in the sixth grade and although he stayed committed until the end of his high school career there was clearly a deeper passion in store. Discovering his passion for bass he taught himself how to play at the age of 13.

Keith's experience runs the gamut of 35 years specializing in Rhythm and Blues, Jazz, and Funk. These genres have inspired and helped him cultivate his sound and made him incomparable. As with any respectable and devoted artist progression is as natural as the talent possessed. Keith knew his calling was higher that himself and rededicated his life to Jesus Christ and began to use his talents to serve and praise Him (Jesus) from which are things are possible and flow.

A man that lives breathes and exemplifies the love of music he is a part of the Ministry of Music at Mount Olive Baptist church where Pastor Clyde Ellis, JR resides and joyously spreads the message of His Word. He also plays in the cover band N2N which he co-founded.